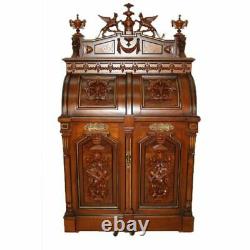 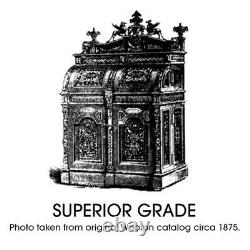 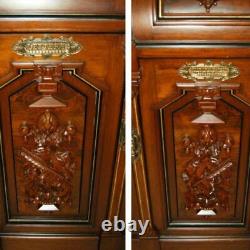 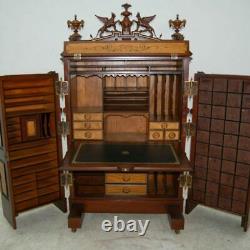 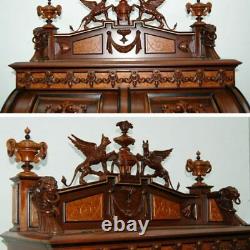 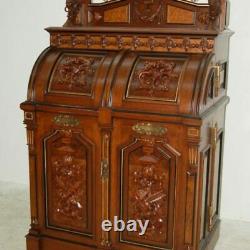 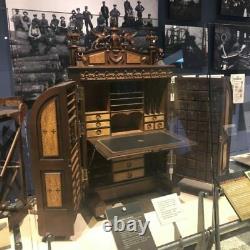 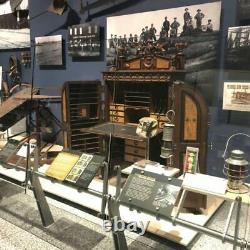 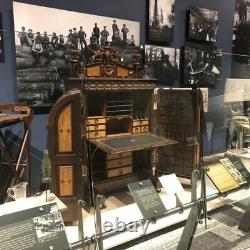 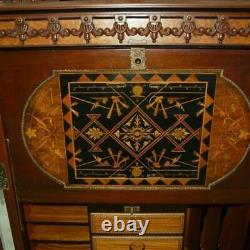 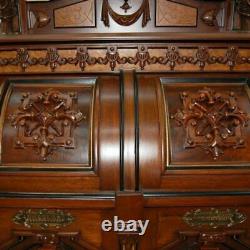 WOOTON DESK 1874 SUPERIOR GRADE A HISTORICALLY IMPORTANT DESK ON LOAN TO THE INDIANA STATE MUSEUM. Antiquarian Traders has loaned this extant example of a Wooton Superior Grade desk with the winged griffin gallery. Matches the original catalog in 1874 and is the only one to survive. We are proud to share it with the hundreds of thousands of visitors in Indianapolis where it was produced. HISTORY These elaborate desks were designed and patented by William S. Wooton, born in 1835, the eighth of thirteen children. Patent in 1868 (#83,896) Wooton formed the Wooton Desk Company in 1870. His most important patent #155,604 was granted on October 6, 1874, for "Wooton's Patent Cabinet Office Secretary". This ingenuity lead to full-scale production in Indianapolis, Indiana in 1874 and continued through 1891, although Wooton retired and became a preacher in 1884.

He died in 1907 at the age of 72. THE COMPANY Wooton merged fine hand craftsmanship with the new technologies of the Industrial Revolution. The design of the desks provided an ingenious solution to the businessman's increasing problem of organization.

Keeping up with the rapid expansion and growing complexity of business during this historical period was no mean task. Production reached a peak in 1887 with 1500 desks produced a month in 10 different styles. Wootons list of recorded customers demonstrates his accurate assessment of the businessman's needs and the historical importance these desks played in the formation of American commerce. Presidents Grant, Garfield, Harrison, Queen Victoria, John D.

Rockefeller, Joseph Scribner, and Jay Gould were but a few of the luminaries who depended upon these desks to organize their daily routine. THE DESK This extant desk was designed and built by Wooton to illustrate the high quality and unique design capabilities offered by the Wooton Desk Company.

It was never intended to be offered for sale and was not going to be a production item. The catalog produced by Wooton features this desk on its cover.

The desk was made first and then a drawing was made for the catalog. Wooton did produce at least 2 other Superior Grade desks. Both featured the floor-length doors but did not have the fabled wing-griffin gallery. Antiquarian Traders found the desk in 1982 in a barn near Buffalo, NY.

No history was available on it. At the time of discovery, the desk was in many pieces, almost lying flat on the ground, and not for sale.

Rockefeller, then the world's richest man, corresponded with Wooton asking him to design a unique special desk. Wooton complied with a completely different looking desk, still functioning the same, and delivered it to John D. Refused, it was too expensive. Probably the most recognized piece of the Victorian Era, the Wooton desk is the centerpiece of any 19th-century American furniture exhibition.

Most museums have The Desk of the Age in their collection. A 94-page book, published in 1983 by the Indiana State and Oakland Museums, researched at Antiquarian Traders' warehouse, is devoted solely to the history of the Wooton Desk Company and the evolution of 19th Century officeDimensions when open. 76"H x 84"W x 37D. The desk is black walnut, and in perfect condition just as it was the day it was made. The item "#271 Wooton Patent Secretary, Superior Grade, Extant, c.

1874" is in sale since Wednesday, June 3, 2020. This item is in the category "Antiques\Furniture\Desks & Secretaries". The seller is "antiquesfromantiquariantraders" and is located in Los Angeles, California. This item can't be shipped, the buyer must pick up the item.